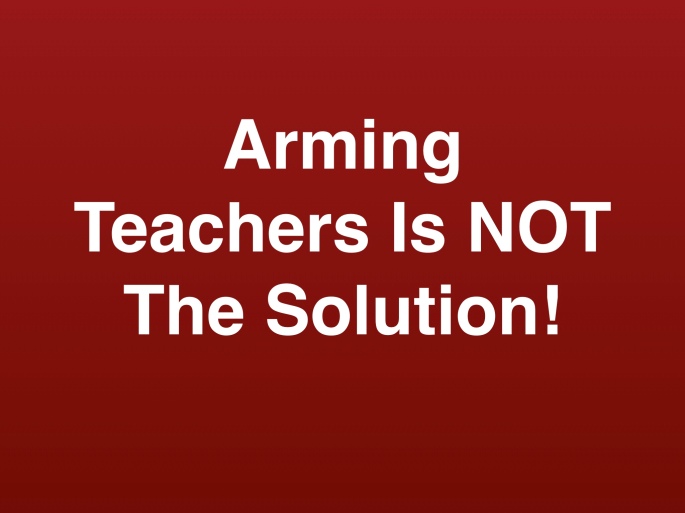 After dedicating 18+ years of my life to teaching high school before retiring this year, I can say with authority that arming teachers with weapons is a very bad and dangerous idea. While some of my former colleagues may disagree, I assert that only more tragedy will occur on an armed-and-ready-to-shoot campus.

Most people who propose arming teachers have not set foot on a high school campus since they graduated. So let me enlighten you. Schools are over crowded. My last teaching assignment was at an at-risk school – the largest Title I school in Nevada. I had 230 students. Most classes exceeded 40 students. Desks were jammed so close together that in an effort to assist students, I had to squeeze between desks. In that type of proximity, a motivated student could have disarmed me in seconds.

While most of my students were great kids, I had legitimate gang bangers, criminals, and mentally disturbed kids together in some classes. There were some scary moments when bloody fights broke out in my classroom between students who felt disrespected at the moment or were getting even for some earlier offense. Rogue students roamed the hallways – popping into random classrooms to disrupt instruction or call out to a friend or enemy. It typically took 5-10 minutes for the administration to respond to one of my desperate calls for a hall monitor or dean after a student went over the edge and began threatening me or another student.

Guns on campus will cause more problems than they solve.

Guns will be confiscated from teachers. A group of determined students could easily overpower most teachers – not just a 145-pound, fifty-something-year-old woman. Plus, many teachers would end up accidentally shooting themselves or a student. Even if locked in a desk drawer or cabinet, that gun is not secure from a student who is hell-bent on getting access to it.

So, do we need to change the qualifications for teaching?

Rather than being certified in a content area, should teachers be required to be weapon certified? Which is more important: a teacher who is gun savvy and bulky enough to intimidate their students, or someone who is committed to providing students with the best education possible?

What if we just allow those teachers who are comfortable shooting guns to arm themselves in class?

What about metal detectors?

Bring them, if that is what it takes to be safe! I would much rather suffer the inconvenience of going through security every morning than working in an armed-and-potentially-dangerous environment.

I have had discussions with family members, friends, and even one of my doctors who advocated that I carry a gun in the classroom. No thank you. I promoted my classroom to be a place of peace, and I hope that the future of education in our nation supports peace over turning school campuses into fear-induced war zones.

9 thoughts on “Guns In the Classroom”